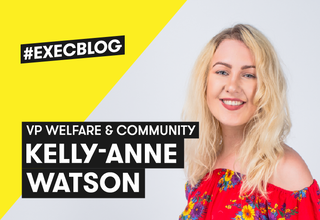 Hopefully, you might have heard about the Zero Tolerance against sexual harassment and violence campaign over the last few months. It is one of my priority objectives this year and so far it’s been really successful.

We have received so much interest from sports teams, societies and students so thank you to everyone who has supported us in trying to create a Zero Tolerance culture.

I have been working with the University to create a video, which will be shown to all students, that will highlight unacceptable but common situations that, unfortunately, happen in day to day life, with the aim of supporting people to come forward and report sexual harassment and violence and to encourage witnesses of these actions to be active bystanders. I am happy to say that the University is not shying away from the fact that sexual harassment and violence happens, that it happens here and that it is an important issue for our students for which we should be providing support.

I have also been contributing to a Zero Tolerance steering group to help create a central reporting system, which will support clear guidelines for staff in the University in dealing with reports of sexual harassment and violence, and also give students a choice about the journey they take when reporting allowing for them to remain anonymous if they wish whilst still accessing support or advice.

This campaign has the potential to go far and we have started to promote it to and engage with businesses in the wider Leeds area. Many have pledged alongside us, starting with Leeds Rhinos who supported the launch of the campaign at Varsity in October. People want to be part of this, they want to see things change including places like Revolution Call Lane, Bierkeller and Shooters, The Wire, Falafel Guys and even LS6 who want to hold an event dedicated to the cause! So if you, or any other students or businesses want to pledge your support to a Zero Tolerance culture to sexual harassment and violence make sure you get in touch!

Join hundreds of students and pledge!

Be an ACTIVE Bystander!

Be part of the change!