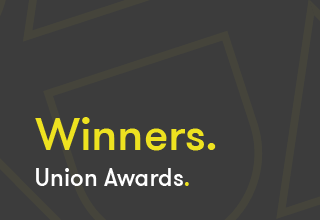 The Union Awards recognize the amazing contributions made by Leeds Beckett students and what better way to host them than at the first festival created by a student, Beckett Fest!

This year has seen some incredible contributions made to the Leeds Beckett community, from events that have raised massive amounts of money for charity, to equality & diversity campaigns on campus… and none of it would have been possible without our students.

Without further ado, here are your winners and a little bit about why they won:

Match Team Cheerleaders
"They have got involved with multiple different projects and events to improve the experiences of people using charitable services in the local community. We feel they have gone the extra mile to create opportunities for their team and other teams in the Athletic Union.       This was a unanimous decision due to the level of involvement from the Match Team Cheerleaders."

Enterprising Student of the Year

"Abbie is a regular volunteer in the campus Thrift Shops. She has used her initiative and previous experience to develop the service; for example, by implementing a new pricing structure, changing up the layout of the shop to make it more appealing to customers and producing engaging social media posts. She is a great asset to the project!"

Event of the Year

"Amazingly successful club night for the student LGBT society, bringing together the communities from Uni of Leeds and LCOM. It has gone from strength-to-strength, raised money for MESMAC and has ambitions to expand as a Leeds-wide event."

"Built Environmental and Engineering Society had the most and best quality nominations received for union awards. BEE Society was established in 2018, and since then the society massively developed. They arranged professional visits from people from the industry that raised the society’s profile and made the students more employable. BEE Soc also showed improvement on both social and professional aspect of the society, provided good links with the professionals within the industry, and was able to create valuable networks and sponsorships that will sustain the society for the future. They are a great example of what a course based society should be."

Society of the Year

"Equals received high number of high quality nominations for the Union Awards. They have consistently hosted events and provided a wide variety of activities for their members with various interests. They actively took part in society collaborations and demonstrated inclusivity through their activities. Equals Society are referred to as family by many students; it was very heartwarming to read the nominations."

"She received the highest nominations for this category. It is evident that Poppy is very dedicated to Coppafeel! Society. Over the academic year, she raised £800 for the Coppafeel charity and awareness of breast cancer across campus in a fun and engaging way that made it more accessible for students to learn more about the cause. We often seen her dressed up as a giant boob on campus - she is a fun and lovely person."

Student Staff Member of the Year

"Fozia was chosen due to her commitment to her own project but also a willingness to help other on other events and projects. Her ‘endless enthusiasm’ was something that caught our attention as well as all the lovely comments made about her in the multiple nominations she received; such as ‘highlight of a Tuesday’ and ‘it’s always great to have her in the office."

"Aoife has been a great Course Rep for her peers which was clear from the nominations she received which all highlighted how well-liked she is by her fellow students and how easy they find her to talk to. She really cares about the course and is keen to ensure that all students voices are heard, questions are answered and problems are dealt with and she is very deserving of a Student Voice Award."

Dew Uwadia
"As International Students' Rep for two consecutive years, Dew Uwadia has worked tirelessly to make International Students' lives better and has been key to driving forward major campaigns to improve the student experience. As if that wasn't enough, Dew has also been a Course Rep, worked in the Student Voice team helping to deliver change for students, and has joined the BAME Ambassadors this year to drive forward improvements for BAME students at Leeds Beckett. She is a frequent contributor to the Student Council, holds your full-time Officers to account for the work they deliver on your behalf, and is generally an all-round superstar."

Volunteer of the Year

"The winner is Poppy as she has committed a huge amount of time to Coppafeel, which has been visible on campus and has run a lot of events to support the charity and raise awareness to students."

Volunteering Initiative of the Year

"We chose the Community Committee as they have had significant and continuous impact on the lives of students through running campaigns and events."

"It was clear to everyone this year, when we read through the nominations and considered the contribution of the many students who engage with the Students' Union, that one student in particular stood out in terms of how much they have given to students and the Students' Union during their time at Leeds Beckett. As International Students' Rep for the last two years, Dew Uwadia has gone above and beyond to ensure that students at Leeds Beckett receive the very best University experience... in the words of one student "Dew has absolutely smashed it!"

She works tirelessly to make international students' lives better and has been key in driving forward major campaigns, including leading efforts to improve the international student attendance monitoring system, lobbying the University to implement a guarantors scheme for international and LGBT+ students, and instigating our work on Hidden Fees - all of which are almost at the point of delivering some major impacts for students.

We're so proud to have been part of Dew's journey through University and to have seen everything that she has achieved. We can think of no-one more deserving of this year's Outstanding Contribution Award."

Thanks to everyone who attended and congratulations to the winners!