The drugs don’t work – The true cost of taking drugs! 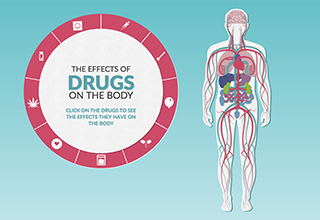 The Priory Group have developed an interactive infographic to educate students on the long term effects that drugs* can have on both the body and mind.

The infographic has been launched for the start of the new academic year, where the majority of you have returned to university and the rest starting out as Freshers. This is a time when young people are likely to be curious about experimenting with drugs as you enter into new friendship groups and experience new freedoms for the first time.

It is commonly thought that the main danger in taking drugs is around the purity of the drug and the short-term physical effects, with little understanding that drug use can lead to permanent mental health problems such as depression, anxiety and paranoia. The infographic, developed by Priory specialists, details the long term damage that taking drugs can cause.

Priory Roehampton’s Lead Addictions Consultant, Dr Niall Campbell states, "I see an increasing number of patients, often only 18, who are not only addicted to street drugs but have developed significant depressive and anxiety disorders. Distressing panic attacks from stimulants and hallucinogens - synthetic or mushroom-based - are on the increase.

I have also noticed an alarming number of cocaine-induced, severe paranoid states requiring admission to hospital. Unfortunately, as I say to patients, this paranoia may not be controlled by antipsychotic medication and may become a permanent state.

Research from the Maudsley Hospital suggests that over 25% of chronic paranoid psychoses, i.e. those which don't go away when drug use stops, are marijuana-induced.  Marijuana is continually being redeveloped to be stronger, and hence more dangerous.  So the problem is worsening."

Given the increased freedom and feeling of invincibility most young people experience during their time at University, and the added peer pressure, it is no surprise more young people are giving in to temptation. The Priory feels young people require further information about what it is they are putting in their bodies and the repercussions.

However, armed with the hard facts about drugs such as Cocaine, Marijuana, Ketamine and Ecstasy, young people will be equipped to make an informed choice and say ‘no’.