The Definitive Guide to Being a Yorkshirian 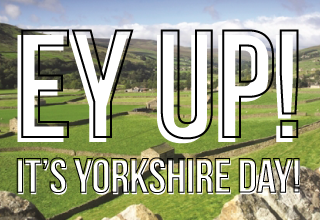 So, you’ve come to Leeds (or will be coming in September) and you think that makes you a Yorkshirian?

You may be one of the lucky few with innate Yorkshireness but true Yorkshirehood must be EARNT. Here are some tips on how you can become a part of this great county.

Many out-of-towners believe we say “t’” instead of “the”, this is grossly inaccurate and we don’t appreciate it. This is merely how we write it. In conversation, we forego the word altogether. Instead to like to grunt in the vague sound of a “the” and each Yorkshirer has their own variation of this. To blend in, you should establish your own grunt.

2) You must own at least one flatcap

The idea that every Yorkshirer wears a flatcap is out-dated and ridiculous. We are not a stereotype, thank you very much. But if you do not OWN at least one, you shall be thrown out of all watering holes and public houses and shunned. Though, if you have more than two, that’s an overkill.

Of course we don’t have a rivalry with Lancashire! That would be silly! That being said, if you ever wear a red rose, Sir Patrick Stewart himself will cry. Why would you want to make Professor X cry? Begone foul cur! In fact, since 1305, no red roses have existed in Yorkshire; legally, they must be called maroon. If you call a maroon rose “red” you could face spending ten years as a sheepdog’s assistant.

For the last time, we are not a bloomin’ stereotype! Check thissen! Be careful how tha uses our precious Yo’kshire lingo. But let it be known that if Ron Weasley was from Yorkshire, he’s have said “Flippin’ ‘eck!” instead of “Bloody hell!” (and everything would have been at least 10x better).

It’s a known fact that Shakespeare’s plays were written to be spoken in a Yorkshire accent. And if you bring up the roll/cob/teacake debate, uncertainty will rule, but there is one thing we know for sure and that is we have some strange place names. If you say them wrong, you’ll be met with stink-eye so listen up!
Mytholmroyd = MI-THUMB-ROYD (okay this one is pretty straightforward once you get past all the Ms and Ys…)
Keighley = KEETH-LEE (We don’t know where the T came from but it’s there, okay?!)
Halifax = AH-LEE-FAX (Hs also do not exist)
Oh, and “Scarbs” is Scarborough and “Brid” is Bridlington and you would be ecstatic to go either place on the one day of British summer.

Well done, you have now become a level 99 Yorkshirian. Go forth and become one with the land.