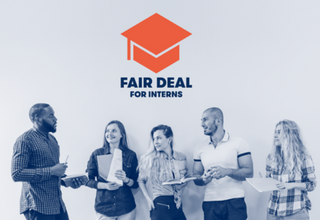 As Leeds Beckett Student’s Union (LBSU), the organisation that represents you and 25,000 fellow students at uni, we are saying see ya later to unpaid work placements.

We may even be one of the first students’ unions in the UK to introduce a programme like this, and we hope it’ll see the end of unpaid work here in Leeds!

We’ve been working with Leeds Business School lecturers, Robert Minton-Taylor and Dr Ioannis Kostopoulos, former Head of PR and Journalism Studies, to develop the accreditation scheme, which will highlight employers offering a fair deal to students when it comes to living wages and providing a valuable career insight.

The scheme is initially being trialled with public relations agencies and in-house communications departments in Yorkshire. If successful, the scheme will be rolled out with other types of businesses in the region and will be put in place at other university so more students can benefit.

Three levels of accreditation will be offered to employers - Gold, Silver and Bronze. Gold standard employers will need to offer the Living Wage as defined by the Living Wage Foundation² of £8.75 per hour across the UK and £10.20 per hour in London.

Kelly-anne Watson, LBSU’s Vice President Welfare & Community, said “Unfortunately, there are many companies who are willing to exploit students by expecting them to work for nothing, or at rates below the national living wage - even when they are making contributions to the work of the company that would normally be carried out by paid employees.

Elizabeth Hudson, joint founder and director of award-winning Leeds agency Cream said: “It’s fantastic to see that Leeds Beckett Students’ Union is asking the wider industry look at their own practices. It’s important that we come together to make sure that young people are being given the best start to their careers.”

Matthew Thompson, Associate Director at Finn, a leading Leeds-based PR agency, said: “One of the core values we live and breathe at Finn is ‘Do the Right Thing,’ which is why we strongly believe in paying students when they take internships with us.”

Robert Minton-Taylor, senior lecturer, Leeds Business School, part of Leeds Beckett  University said: “I applaud LBSU for taking this courageous stance on unpaid student employment. Offering unpaid placements is unethical and unacceptable. As a former board director of a global consulting firm I know that PR interns add real value to businesses and are capable of producing award-winning work as our collaboration with IKEA at Leeds Business School has shown.

“My 50 years in public relations and journalism tells me that there is simply no excuse for not paying students a wage. Interns need to be treated fairly and rewarded accordingly. Doing otherwise is tantamount to slavery.”

Sarah Hall, president, CIPR said: “Unpaid internships are a stain on the PR industry. Failure to pay interns encourages a culture of economic prejudice and deprives our profession of diverse talent. The CIPR is proud to support Leeds Beckett Students’ Union’s campaign and we urge employers to sign up to the scheme and obtain the accreditation that will help rid the industry of this unethical practice.”

Francis Ingham MPRCA, Director General, PRCA and Chief Executive, International Communications Consultancy Organisation (ICCO), said: “The PRCA has continuously argued that unpaid internships should be banned. Not only are they immoral, but they also hinder progress and limit internship accessibility to the few. It is very promising to see establishments such as Leeds Beckett Students’ Union take this stance against such issues, and I can only hope that others follow suit.”

²Living Wage Foundation. (2018). What is the Living Wage? Available: https://www.livingwage.org.uk/.