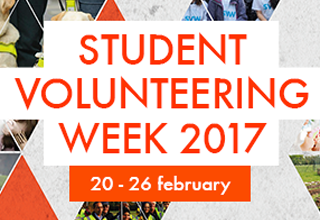 Some people say “All students do is sleep and drink!” Well, during Student Volunteering Week we slept…and also sort of had a drink, but it was all for charity so don’t judge us just yet!

For Student Volunteering Week we slept under the stars. Not all week. Just one night. The night was cold, wet, we ate far too many sandwiches but it was also an amazing, hard hitting fundraising event whereby both staff and students slept outside on campus all night to raise funds for InTouch Foundation. It also raised awareness to ourselves and hopefully to others of some of the challenges faced by people sleeping rough. We were in a group but many people sleeping rough are by themselves which could be quite lonely all night in the cold. We also felt relatively safe being on campus and as a group but again, if you are by yourself on the street would you feel safe enough to close your eyes and attempt sleep? So many questions and issues were raised about sleeping rough in just one night and so it definitely served its purpose. The volunteers also raised a staggering £1,800. A fantastic personal achievement for everyone, certainly not an easy volunteering activity to sign-up to do and one which had a personal impact beyond the night.

Now we come to the drinking. We took the party to Halcyon Court with our Cocktails in the Carehome event. A team of fantastic students spent an afternoon serving cocktails, sharing stories with the residents and listening to Hawaiian, contemporary and jazz music. This is the second time we have ran the event, each time growing with success and one we are sure will be repeated.

It wouldn’t be student volunteering week if we didn’t dig out our knitting needles, we know its typical volunteering activity but we did it for the cats. Yes cats need scarves too! A similar project ran in London whereby cats in rescue centres were being given knitted scarves as a little bit of comfort whilst trying to find their forever homes so we formed a team of volunteers and spent an entire day knitting scarves. Fancy knitting a cat scarf? Get in touch with the team if you would like to do this in your spare time and we will post them on for you.

We also used SVW as a means of teaching students that if you want something in this life, you have got to work for it. Even if it is just a smoothie. We headed over to the Gym for an afternoon of micro-volunteering with an amazing contraption of a bike which powers a blender and in turns makes smoothies. We encouraged our students to make a smoothie, raised awareness of mental health petitions and the significant impact exercise can have on a person’s mental health.

Another key message in SVW was the importance of Community. Students often form their own communities with each other but it’s also important to remember they are part of a wider community in Leeds. With that in mind we took a team of volunteers to Batcliffe Wood to do basic conservation and environmental work whilst meeting other members of the community. It was a fantastic way to spend a morning. Continuing the environmental and community messages the Refloat Student Led Project Team also headed out in SVW to continue spreading their amazing work of glass recycling in Hyde Park, collecting glass from student houses and recycling them. The team volunteer once a month so look out for them around Hyde Park.

So was SVW worth all the preparation and planning? Yes it was. Will we be back next year for another week of opportunities for our students to tackle issues important to them, gain some new experiences, skills and friends? Definitely. Thank you to all our community partners and the dedicated student volunteers who all contributed to an amazing Student Volunteering Week.