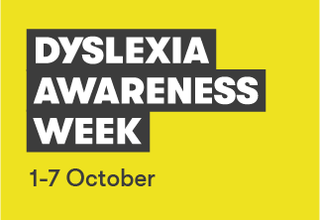 1 -7 October marks Dyslexia Awareness Week in the UK, so we thought what better way to highlight dyslexia than to put together an insightful article about this well-known but poorly understood condition.

Dyslexia is a learning difficulty which affects a person’s ability to read, write and spell and affects around 10% of the population of the UK. Contrary to popular belief, dyslexia is not a marker of intelligence and the idea that dyslexic people are stupid or unintelligent is a huge misconception. In fact, some of the greatest minds in history were known to have this condition, including Albert Einstein, Pablo Picasso and Richard Branson.

What are the symptoms of Dyslexia?

Dyslexia is a condition that exists on a large spectrum and so signs and symptoms of dyslexia can vary from person to person, but common symptoms do include difficulties with reading, spelling and writing as well as problems with organisation and memory. Some dyslexic people may have all of these symptoms, whilst others may have only have some of them in varying degrees.

If you have been experiencing any of the above symptoms and are concerned that you may be dyslexic, come and speak to our advice team who will be able advise you on the best course of action. Alternatively, you can use screening technology like Quickscan, to see if you have any indicators of Dyslexia or any other Specific Learning Difficulty.

Quickscan is a screening test which is available on MyBeckett. It uses your responses to a series of questions to highlight symptoms of any Specific Learning Difficulty (like Dyslexia), as well as suggesting which is the best style of learning for you. Although Quickscan can’t give you a formal diagnosis, it can give an indication as to whether you should seek a further advice. You can find all the info on the Quickscan test here.