It’s a dog’s life on Campus

by Abigail Henderson and Becky Dobson - Taken from leedshacks.co.uk/lifestyle/its-a-dogs-life-on-campus 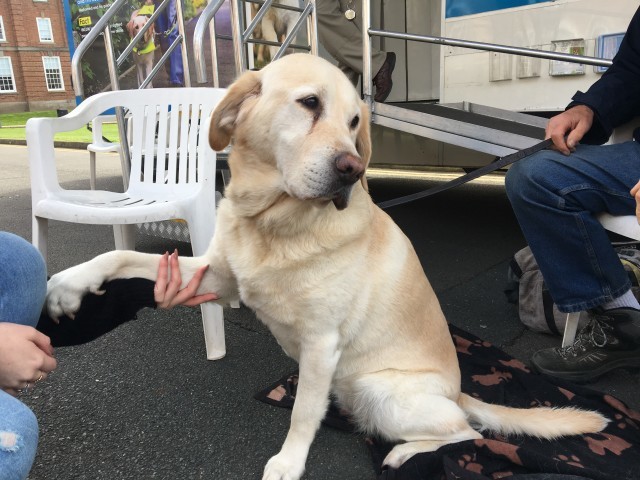 Students at Headingley Campus had the opportunity to spend quality time with some furry friend’s today to raise awareness for Guide Dogs. The dogs, some retired and some still in service, came along with volunteers from the charity.

He retired a little bit early, most of our dogs will work up to around nine to 11 years old. Occaionsally some dogs like Titan just decide enough is enough and that’s fine, we don’t force the dogs to carry on working, if they’re giving us the signal it’s time to retire then they’ll retire. Titan has been retired and is living with the lady that had owned him as a guide dog so they’re still together. Some dogs when they retire they’re not able to stay with their guide dog owner, they may be re-homed with someone else through our re-homing programme. Some will even go back to their puppy walker who looked after them as pups.’’ 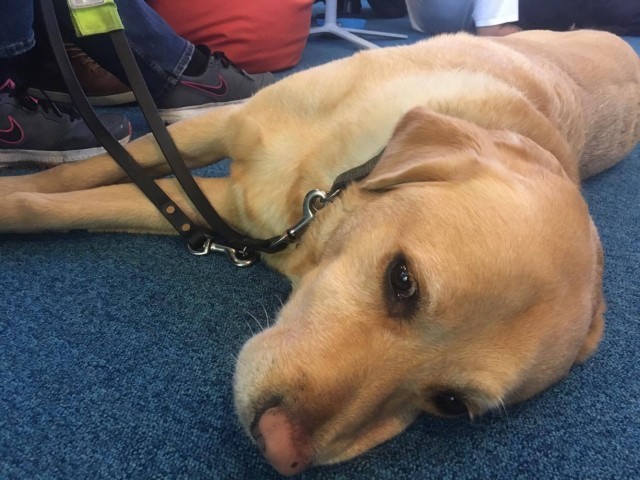 Six year old Titan: Guide dogs generally retire around nine years old but some retire earlier if they are ready.

She went on to say, ‘’We get the dogs used to being in this type of environment quite early on because when a dog starts working it may be matched with someone who works in a busy office environment, so we try to get them used that type of thing as quickly as we can.

When we do these type of events the dog’s welfare is really important, so we limit the amount of time the dogs will spend at this type of event, we’ll make sure we’ve got a space we can take the dogs for a break if they need one, and we always advise our volunteer guide dog owners and puppy walkers to check with their trainer to make sure that this type of event is suitable for to bring them along in the first place.’’

Ruth also told Leeds Hacks some key tips for if you encounter a working guide dog:

“What we do ask is that when you see a dog working please don’t distract it, if a dog is in harness then it is working and they have to concentrate really hard to keep their owner safe and to do their job so we ask that people don’t go over and distract them.’’

”If you meet a guide dog owner and they have taken the harness off, it’s always polite to ask if you can say hello to the dog. Many of our guide dog owners are quite happy to let people meet their dogs, stroke the dogs and will happily answer any questions you might have about them.

Be wary of treats

”The other really important thing is to never ever feed a working guide dog. These dogs are on a very carefully planned diet to make sure that we keep them in optimum health and we certainly don’t want them to get used to them receiving these snacks as that can encourage scavenging behaviour and also they could be eating food that could be potentially harmful to them.’’ 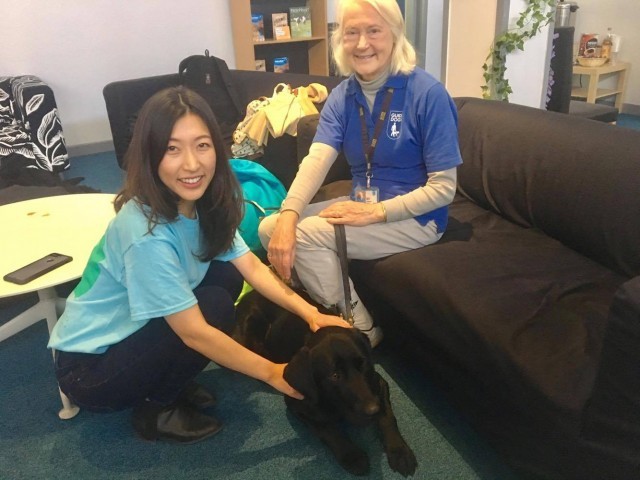 Guide Dogs rely on volunteers and donations from the public

When asked about these events Ruth said, “It’s not just about raising money, obviously as a charity we rely on donations from the general public, that is really important to us but these events do raise awareness about the work that we do as well. I think a lot of people think of Guide Dogs as being an animal charity whereas in actual fact we’re a peoples charity. We are supporting people living with sight loss and the guide dogs is just one way that we do that.’’

“He’s my guide dog, but he’s also my best friend.”

Leeds Hacks spoke to guide dog owner, Kevin Ross, who is visually impaired, has had his guide dog, Graham, since July last year.

He told us, “I’ve got a condition called macular dystrophy which is a lump on the back of your eye that attacks your retina and inevitably takes part of your vision or your full vision. I was advised by to apply for a guide dog, 6 to 8 months later they brought Graham to me. When they brought him there were 10 family members with me and he went round, sniffed at everyone then came and sat right by my feet as though he already knew he was for me.

Just before I got Graham I had a stroke, which affected my memory. Graham has learned to compensate for that by if I tell him left and he knows he’s supposed to go right then he goes right.’’

It’s a bond that’s took 12 to 15 months to get there but he’s perfected it now and he never leaves my side, even at home he follows me everywhere.

He’s a very spoilt dog, he gets showered and blow dried, he has 7 different brushes that gets used everyday. It’s all part of building that bond, he’s not just a dog he’s part of the family, he’s my companion, obviously he’s my guide dog, but he’s also my best friend. It’s just that bond there that you can’t explain’’

Kevin also told us about the time Graham saved his life, “I thought the road was clear but there was an electric car which I couldn’t hear, so I stepped out and he pulled me back, otherwise I would have been run over.’’ 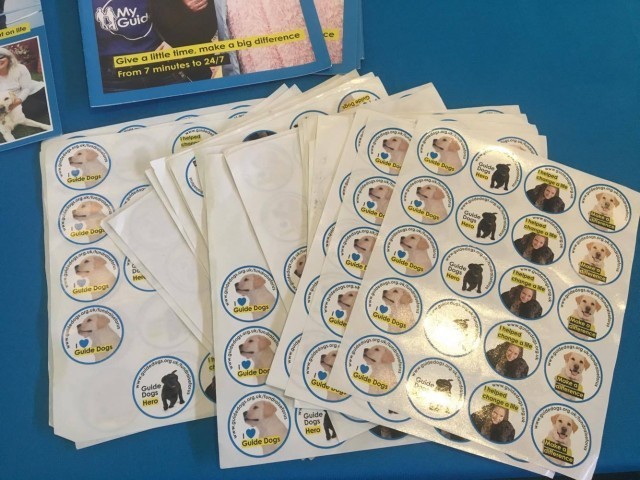 While Guide Dogs cares for dogs it is a people’s charity for those who are visually impaired.

Experience it for yourself

Guide Dogs also came equipped with their sensory van, this offers a unique experience to walk in the shoes of someone who is visually impaired, experiencing different surfaces and situations to see how guide dogs would be a vital help.

Leeds Hacks had a go:

The event was organised by Community Engagement Coordinator, Sophie Moody, she told Leeds Hacks, “It’s nice just being able to spend some time out and enjoy some time with animals because they are very therapeutic, very gentle dogs the guide dogs, so its a really nice draw in to finding out about the Guide Dogs charity.

Everyone knows about guide dogs and how they help people who are visually impaired but to find out what goes into the training and retirement of these dogs is really good. I didn’t know before just how much training went into the dogs and how a lot of them are fostered with volunteers who look after them for a year whilst they are in training.

Also with the sensory van it offers people a real experience of what its like to be visually impaired, it gives you a sense of how a guide dog could help you.”

Guide Dogs are aiming to set up a guide dogs society within the university to continue raising awareness and getting people involved with the work they do.

Contact the SU or email Guide Dogs at guidedogs@guidedogs.org.uk