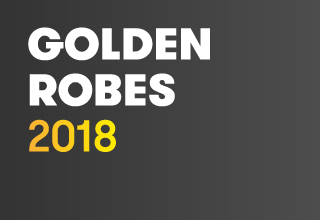 We've had an incredible evening at Golden Robes 2018! This year we teamed up with Leeds Beckett University to put on an amazing event to regognise all staff at the University and at the SU.

With over 700 nominations made, you have really shown how much staff have made a postive impact on your lives while studying at Leeds Beckett.

Golden Robes gives us an opportunity chance to bring everyone together to look back on 2018/19 and recognise the success, achievements and dedication of everyone at the University and SU. Stephanie Hirst (Hon. Degree) was a great host this evening alongside Peter Slee (Vice Chancellor), Meg Robinson (SU President) and Jack Harrison (VP Education/SU President Elect) who presented the awards.

Well done to everyone who won, was shortlisted and to all who were nominated.

Here are our winners:

Best Lecturer: David Dewhurst
"The winner of this award has been described as having ‘a high value to the student experience’, and his class was described as ‘the easiest three hours of the week, which passes almost too quickly.’ Students said they massively benefitted from David’s expertise and the support he provided went above and beyond classroom time."

Best Course Team: Youth Work & Community Development
"This course team has been described as making every student feel that they are important. The team are always there for both academic and pastoral support, and they go the extra mile to ensure every student is doing well. One student described the team as having ‘a lasting impact on their time at university.’"

Best Module: Tourism & The Media
"The winning module has enabled students to think outside the box, and has enabled them to gain skills that will be applied to their future careers. It has been described as creative and fun, and has greatly helped with students’ employability; vital considering it is a Level 6 module."

Best Feedback: Dr Richard Stevens
"The winner of this award doesn’t just give students written feedback – they record feedback that the students can play back. This meant the feedback came across as much more original and personal, which was something a student described as ‘something completely fresh coming into their third year at university.’"

Best Course Director: Neil Kelley
"The winner of Best Course Director has been described as having a really positive attitude, making a real impact on their students, keeping them motivated and reminding them why they committed to further study. One student said ‘without his constant contribution to making every single students lives’ better my university experience wouldn't have even been half as positive as it has been.’"

Best Dissertation Supervisor: Moade Fawzi Shubita
"The Best Dissertation Supervisor supports his students not just in person, but over Skype too, ensuring that even when students were abroad they could reach him for support. Moade’s sincere support and help ‘beyond expectations’ did a lot to enhance his students’ work, and his support was said to be ‘vital to the student’s timely submission.’"

Best Academic Advisor: Nicola McCullough
"The winner of this award is described as being an ‘amazing presence’ on their course, and is always willing to help students with any issue, big or small. Nicola always has time for her students, welcoming them to just knock on their office door if they don’t have teaching. A student said that in the last two years of having Nicola as a personal tutor, they became much more confident and is now able to perform to their full potential."

Unsung Hero: Chian Gatewood
"Our winner received numerous nominations from both students and staff who were all immensely grateful for the support that Chian have given them. Our students gave such positive feedback about her approach and the memorable impact this has had on their studies. Her skills as a Learning Technologist have been highly praised and to many they are so much more. Chian is a deserving winner of Unsung Hero."

Diversity: Dr Delroy W. Hall and James Williams
"Our first winner is fairly new to the University and has brought a great deal to the counselling course. Delroy has helped students to speak out and learn about themselves, so that that they can go on to be great counsellors."

"Our second winner has been described as always having gone above and beyond to make sure that a student was able to access everything University life has to offer without being held back by their disability. The support and understanding that James has offered has enabled a student to look forward to their graduation this summer, which might not have been possible without them."

Memorable Moment: Andrew Manley and Campus Pride
"The first award goes to an academic who has had a really positive and motivating impact on a student in tutorials, which ignited their future ambitions."

"Our next winner in this category is an event that was described as being ‘filled with a sense of community and pride among students and staff’ and involved various initiatives to support LGBT+ students throughout Leeds. It has won the NUS LGBT+ Event of the Year two years running, a testament to the hard work of the staff involved."

Outstanding Contribution to Enterprise and Innovation: Dr Helen Nichols
"Helen has devised the Leeds Beckett Prison Learning Together Programme, which has received nationwide recognition and she now supports other universities round the country to set up and deliver their own higher education courses in prisons. This was all done whilst completing her PhD and taking on the role of course director for almost 1000 students is a remarkable achievement."

Researcher of the Year: Dr Vincent Postis
"The panel felt that Vincent had made a significant and valued contribution to research, which has enhanced the reputation of the institution in the area of Biomedical Sciences. This has been done alongside his teaching commitments, successful research applications, PhD supervision and organisation of a successful international conference on nanoparticles."

Team of the Year: SU Volunteering Team
"The winning team have provided a huge range of volunteering opportunities for our students to build links with, and help the local community, from events such as A Night on the Acre and Student Volunteering Week, to worthwhile causes such as St. Georges Crypt. They have helped to create so many enjoyable and memorable experiences whilst improving the student experience at Leeds Beckett."

Leader of the Year: Jo Horsfall
"The winner of this award has been described as ‘a leader who is passionate about supporting students, and equally about empowering and developing the staff in their team. She is continually interested in the people around them, and what motivates and drives them, and transforms this into opportunities that both support and challenge. The University benefits from her excellent performance and engaged staff."