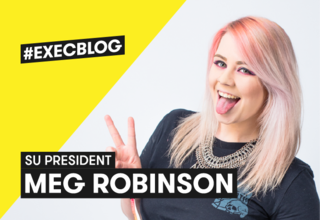 Hey everyone, your new shiny SU President here! I wanted to dedicate my first blog post to a very monumental thing that happened almost a year ago, I graduated!

Not only that, but I was given the absolute honour of delivering a speech on behalf of all graduating students, so this blog is really about graduation day, the speech and what life is now like as a Leeds Beckett Alumni.

My graduation was slightly different to the average student as I was part of the platform party and the academic procession, which meant I walked in after the graduates and guests and was on stage for the most part of the ceremony.

Whilst some parts were daunting, I was able to pick up my robe and tickets with the rest of the procession which meant the process was much quicker.

So on the day, I was robed up with my tickets in hand ready for the barrage of photos from my family, I found my course mates and their families and as time crawled closer and closer to the ceremony the nerves kicked in. I had spent the whole morning practising my speech over and over, but I still didn’t feel prepared to speak in front of my course. I guess it didn’t help that I found out before the ceremony over 2000 people were attending the ceremony, that’s 4000 eyes staring at me!

At 13:30 I had to disappear off, leaving my family in the marquee and dash off to prepare to walk with the hope that they find their way to the hall, I left them with Prosecco and drinks vouchers so I don’t think they minded too much!

Then it was time to walk in the procession to the hall, luckily I had met the academics walking with me so it wasn’t too weird. I was incredibly nervous, and the usual questions were going around in my head; ‘what if I fall over?’, ‘what if I forget my lines?’, ‘what if nobody claps?’, ‘Are they just going to think I’ve said graduates wrong when I say graduands?’ (Yes, that is a thing).

As the questions went round and round in my head I actually forgot the throbbing pain in my feet from my shoes so every cloud I guess. Walking into the ceremony was exhilarating, seeing the familiar faces of my course mates made me feel more grounded and soon enough I walked past my family and I felt relieved they actually made it to the hall!

I had a little wobble walking up the stairs, but thankfully I didn’t fall. I was sat on the front row on the stage which meant I got a feel for the room as soon as I was ushered to sit down. When I was sat up there I suddenly realised, other than the front row, I actually couldn’t pick any individual people out which made me feel a lot better, suddenly 4000 eyes didn’t feel so daunting.

My speech was first up, my nerves at this point had now dissolved to adrenaline and I was ready, I walked up to the lectern and looked out to the audience. My speech lasted around five minutes and it was honestly the scariest yet rewarding thing I have ever done. The applause I received was amazing, and I think people liked it as I was approached multiple times afterwards and congratulated on the speech, my mum also cried as I gave her a special mention in the speech, so overall it was a huge success.

So, what is life like as Leeds Beckett Alumni? Well for me, the first thing I realised is how lucky I was to have gone straight into employment, I know so many graduates who are struggling for full time or degree related work. So I guess there, another huge thank you to everyone who took the time to vote for me to be Vice President Education back in March 2016, you absolute life savers.

Another huge adjustment I’ve had to make is getting up in the morning, being such a huge fan of laying in and sleeping the day away I think it was such a shock to the system, but I have adjusted. The real test was when Freshers began and all my friends were out partying whilst I’m getting an early night, but as gutting as that may be, how many graduates can say they are already in a job they love so early after graduation? Probably not many, but I certainly can!

If any final year students would like any advice regarding graduations and life beyond that, please get in touch, your final year goes so incredibly fast and being as prepared as you can will definitely help you. Alongside this, if you are interested in taking a similar path to me and would like to run in the elections, I can advise you on that too! I’m going to end it here as I’m rambling, I hope you all have an awesome Freshers’ and make the most of your Leeds Beckett life!