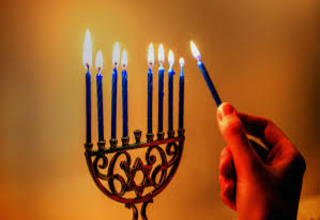 Shira Collins is a second year student studying Childhood Development and Playwork. She is also the Secretary of the Jewish Society (J-soc) and is passionate about being an active member within the students' union.

This year, from Sunday evening of the 2 December until Tuesday 11 December, it is the Jewish Festival of Chanukah. The English date does change yearly due to the difference in the Jewish calendar, but the festival usually falls within December.

I, along with many other students at Leeds Beckett, will be celebrating this eight Day festival of light. Due to the similarities of exchanging gifts and time of year, Chanukah is often compared to Christmas. However, the origins of the two festivals couldn’t be more different.

The festival of Chanukah is enriched with Jewish history and tradition. 2500 years ago, in the land of Israel, during the time of the second temple, the land was ruled by the Greeks and their king Antiochus. Antiochus tried to make the Jewish people abandon their faith by banning anyone from practice of Judaism. He also enforced the Jewish people to worship Greek Gods and Idols. The Ten Commandments forbids the worshipping of other Gods or Idols, therefore the Jewish people refused, and carried on practicing Judaism in hiding.
A small group of Jews called the Maccabees rebelled and after a three year war, they recaptured Jerusalem from the Greeks. The Maccabees were completely outnumbered and did not have the resources that the Geek army did. This victory was the first miracle of Chanukah.

After the war, the Jews had to clean and repair the Temple, and when they were finished, they rededicated the temple to God. They did this by lighting the Menorah (candelabra) - a symbol of God's presence. Only one small jar of oil was found intact, enough for one day. Miraculously the Menorah stayed alight for eight days.

Today, over 2500 years later, we still celebrate these incredible miracles. We light our own Menorah adding a candle for each night. We eat oily foods such as doughnuts and the traditional Jewish food of a latkeh (a potato pancake, similar to a hash brown.) Many people enjoy the family time and traditions of this festival of light and some even exchange gifts!

If you are interested to learn more, on Wednesday 5 December at 19.00 the Jewish society will be hosting a public candle lighting at the front of the Leslie Silver Building. Why don’t you come along, ask questions and maybe get in a sneaky doughnut too!