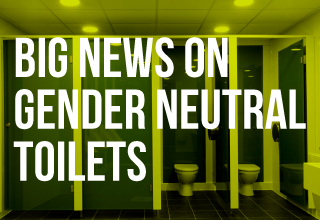 Back in October 2015, the Trans Inclusivity Policy was passed in Student Council, which stated that the Students' Union would "[r]esearch best practise around provision of Gender Neutral Toilets with a view to lobbying the University to provide such spaces." We are super excited to announce that there will be gender neutral toilets at both campuses after the Christmas break!!!

There are many reasons that trans or non binary people do not feel comfortable using gendered toilet facilities. People in the trans community often face physical, verbal and sexual harassment from cis people if they are perceived to be be using the 'wrong' toilet. Those who don't identify as either of the binary genders will be unable to accurately categorize themselves as men or women which, when using gendered toilets, are the only two options.

Some trans people will also experience gender dysphoria when they are forced to choose which toilet to use.

We want to acheive education on transgender identities rather than ignorance, and by asking trans people to use accessibility toilets, we are merely ignoring the issue when we have enough facilities and resources to make them feel comfortable and safe.

During Bright Ideas week this term, many students told us they wanted gender neutral toilets and when it was submitted online, 75 students supported this idea.

For clarification, the gender neutral toilets will be additional to the current gendered toilets. We understand that many students will still prefer to use gendered toilets for a variety of reasons and we are not taking away from this.

We really appreciate all the help and support we have received while campaigning for these toilets.

From your Trans* Rep, Kai, and your VP Equality and Diversity, Maddy!